Moe has a tail tale to tell.  He went MIA and put everyone into a frenzy.  We thought we had lost our dear Moe in a Box.  All the neighbors were alerted, all the contructions sites notified, Vet was called, Animal control and the Animal Shelter.

See Moe makes a wide patrol of the area and is friends with everyone along his path.  A couple of days after the alert, Moe was spotted, but he would not come to anyone - very odd for him and we were afraid he was hurt or sick.

I knew from the bird and chipmonk and other wildlife 'alarm' calls what path and hiding spots he was using.  I spent many days walking those paths calling him and setting out some of his favorite treats.

Bella, who took great pride in showing Moe who was boss, got more and more frantic and meowy each day.  She won't leave the property, but would sit at the end of the drive or sidewalk while I made my routine.  She would be heart broken each time I came back without him.

WELL - after 8 days I had made one of my treks and returned with heavy heart.  I decided to put my mind and energy into some housework and in the middle of one of my tasks I heard the patter of feet and a feeble meow.  I thought it was Bella in need of a little more cuddle time - it was MOE!!!  Skinny, dirty, full of fleas and ticks, a few scratches, and very jumpy.

I just spent a few hours of talking to him, fed him, allowed an occassional pet - Moe came around.  He is now back to his old self and clean, deflea'ed and small injuries tended to.  We suspect that the local kids that have been tearing up our fields with their dirt bikes might have given Moe a chase.  And as they ride every day, would make it a reason he was afraid to come out of hiding. 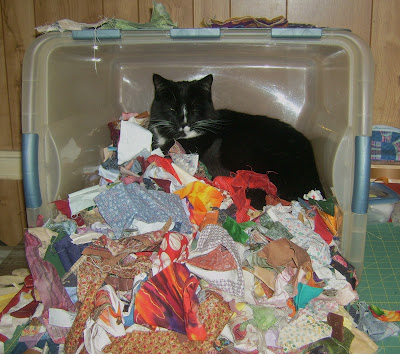 Everyone is thrilled that our loveable, clown is home and it wasn't his 9th life.

Sewingly Yours,
Sharon
Posted by Vroomans' Quilts at 10:04 PM

so good he found his way home and all is well, trust he will not roam so much now

Oh poor poor little Moe! Sharon, I'm sure it was the longest 8 days Of your life while looking for Moe. So happy he made it home with minor injuries!!!!

Such good news that Moe is back home safe. It is so heartrending when a loved animal goes MIA.

Thank goodness the story ends with Moe safe at home. Happy to hear he is back!

so so happy Moe is back. give him extra hugs and kisses from me

Our Omalley did the same thing for 2 -3 weeks about 10 years ago. Once we got him back, he was on house arrest. He is 16 years old now and still tries to get out occasionally. Glad you found your Moe.

You must have been worried sick, 8 days! I wonder if this will keep him close to home for a while. Looking at that last picture makes me think the way to catch a Moe is to put a container of fabric scraps out for him :)

Glad Moe came in from the woods/world. What a nightmare for you, but so happy he will return to his antics in the fabric boxes.

Praise God for happy endings! What an ordeal for all of you....that's a long time to not know his whereabouts. Glad he's back home and feeling better. Don't ever do that again, Moe!!!!

Ohg, I'm so glad Moe came back to you. I know how worried you must have been, not knowing what happened to him. Give him his own special welcome home box.

I'm so glad the story has a happy ending Poor little Moe. I wonder if he'll stick closer to home now.

what an ordeal! So happy he is safely home again. He may think twice about wandering about now !

I can imagine your worry. I would miss the Bella and Moe pictures without the Moe part of the duo. He's on top of the scrap pile again, where he belongs.

Hi Sharon, what a relief he is home. It is so worrying when this happens. We had a little female cat and bad things had happened to her before we adopted her, so we kept her in but she got out one day and went missing and I just remember her coming up the path and was so relieved to see her. Glad Moe is now home. Hugs, Susie x

So, so glad the story has a happy ending.

Poor Moe. I'm so glad he's come back home safe and sound. Years ago, our Jack Russell dog, Poppy, went missing. About two weeks later she turned up home very skinny and dirty. We think she must have chased a rabbit down a hole and then got stuck. She had to wait until she lost enough weight to be able to get out.

Hard to know whether to kiss them or kill them when they put a scare in you like that. So glad he's back.

Phew.... that was a relief to have the happy ending!

Very glad that Moe is home again and not too much the worse for wear.

So glad Moe is back, safe and sound. What a fright for both of you.

Glad to see Moe safe, sound and comfy among your scraps.

Your quilts are always so beatuiful and cuddly, I can see why they get covered on the sewing table!

Oh wow. That is some tale and I'm very happy that he is home safe and sound.

So very happy to hear that you got him back, how scary that must have been, I, too, have a kitty named Mo, he is orange and white. 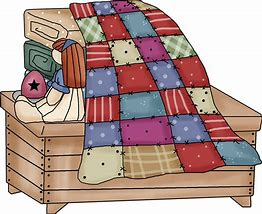